Last night, I had a dream that Jim from “The Office” advised me to lose weight if I wanted to get ahead in corporate America. This was upsetting for a number of reasons, most obviously the fact that even “new” Jim, wife-and-family Jim, would never, ever give anyone work-related advice, unless it was to recommend a flavor of Jell-O that looks really great with a stapler embedded in it.

“What I’d like is to see you train for an Iron Man competition,” he said. His hair was still floppy, but his voice had that fake earnestness that people get after one too many management training seminars.

“Hey, I’m not that fat,” I said, laughing nervously.

He just raised his eyebrows.

Bad as this was, it was far from my worst nightmare. And hopefully, it won’t become a recurring nightmare, either, although I suppose if it’s possible to make sure that happens, writing a blog post about it might be just the ticket. I hope not. I already have plenty of recurring nightmares that I could really live without. For instance:

I’ve been having these since before I knew there were such things as zombies. (In fiction, and in the ant kingdom.)

Before I saw snippets of “Night of the Living Dead” on late night TV, my zombie dreams were light on zombies and heavy on the apocalypse. Blame church, or growing up in the last gasp of the Cold War. I have no idea why I became so fixated on the end of the world, but I clearly was. From the time I was eight or so, I had only to drift off for a minute before end-of-the-world scenarios unfolded behind my eyelids.

I was on a raft, after a Bomb-induced flood, looking for my family. I was in my treehouse, hoarding food and water as slow zombies (the only kind there were in the early ’80s) scrambled around the roots, trying to figure out how to climb the ladder. I was in the bomb shelter in my school, waiting for a rescue that would never come while living on Twinkies and whatever was in those boxes marked TINNED BISCUITS. (As a child, I figured dog biscuits. Now I wonder which British person was in charge of packaging our emergency supplies.)

Possible Interpretation: Let’s ask the internet, shall we? Per Dream Moods: “To dream that you are attacked by zombies indicate that you are feeling overwhelmed by forces beyond your control. You are under tremendous stress in your waking life. Alternatively, the dream represents your fears of being helpless and overpowered.”

2. The One Where My Teeth Fall Out

A committed teeth grinder, I’ve spent most of my sleeping life examining my mouth in a mirror, only to find that my chalk-like tooth nublets are falling out like molting feathers.

Possible Interpretation: There are a lot of different thoughts about this one. My therapist thinks it’s a dream about the fear of castration, which doesn’t mean that in my dream life, I think I’m a dude. (I asked.) Rather, it’s about feeling powerless — something we can probably all relate to, regardless of our gonad situation. Also, it occurs to me that I am telling you way too much about my stress situation.

This one seems like it’d be great. Who wouldn’t want to fly, or walk up walls, or operate any car without a key? (An actual weirdo super power I had in a dream a few years ago, and never forgot. Apparently, I am also a car thief in my dreams.)

The problem with this dream is that, like Bugs Bunny, as soon as I remember that I can’t do whatever it is, I fall out of the sky, or the car dies by the side of the road. A serious bummer, to say the least.

Possible Interpretation: I want life to be just like those YA novels where it turns out that the only thing the heroine needs is to BELIEVE IN HERSELF. Or I wish I could fly and steal cars. 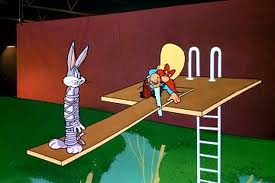