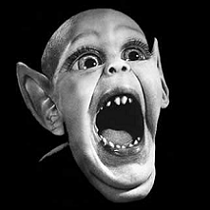 One of my greatest regrets in life is that the Weekly World News shut down before I got the chance to write for them. I’m especially sorry that I didn’t get a chance to use my crack reporting skillz to uncover more information about my beloved Bat Boy.

2) Bat Boy had his own musical. He’s been referenced in the film Twelve Monkeys and in an episode of Roseanne.

3) Your rules do not apply to Bat Boy. He has, as Wikipedia points out: “a chaotic sense of morality. He has been said to steal cars and not to come to the aid of the needy.”

4) Bat Boy’s only friend is Dr. Ron Dillon. Dr. D found him in the Lost World Caverns of West Virginia, and apparently took a shine to him. (True love doesn’t care about GTA.)

5) Bat Boy is roughly two feet tall, weighs 19 pounds, and sheds his wings every three years. (No worries. He grows a new pair every year.)

(Note: While I was writing this, I discovered that the Weekly World News still exists – on the interwebs. If you miss Bat Boy as much as I do, you can keep an eye out for him on WWN’s online presence.)